Saturdays are rarely relaxing for any bargain hunter. Garage sales, yard sales, estate sales and auctions beckon, ripping us from our cozy beds early in the morning and refusing to let us return until late at night. At least that’s how it goes for me. 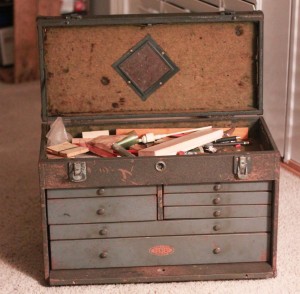 Saturday morning, I rolled out of bed at 7:50 a.m. hungry, foggy and ready for the hour and a half drive to Centre, Alabama for an antique auction. Little did I know, this weekend was the annual Highway 411 yard sale, and I stumbled upon an antique and bargain hunter’s dream. The sale runs from Leeds, Alabama, to my hometown of Knoxville, Tennessee.

In Gadsden, I came across an older couple selling a hodgepodge of trinkets, furniture and antiques out of their little green horse trailer. I browsed a bit, an old machinist’s chest catching my eye, but I only had $9 in my pocket and half an hour to get to my auction. So, I hopped in my car and carried on towards Centre.

I didn’t have much luck at the auction, so I left early. For some reason, I couldn’t get that beat-up chest off my mind. After visiting an ATM, I headed from Centre back towards Gadsden- my eyes peeled for that church parking lot.

Then, I found it. But the machinist’s chest was nowhere in sight. My heart began to sink but was quickly reassured by a familiar face. The older woman was just finishing packing the trailer. The day was hotter than they had expected, she said, so they were quitting early. Nervously, I asked about the chest.

Her husband appeared, dug around in the trailer and pulled the chest out for me. I agreed to pay them $45 for the chest, with the assurance that I would tell its story. 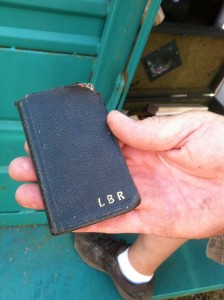 The couple told me that the chest came from a storage unit that had not been opened in 40 years. They left everything in the chest, just as they found it. The man showed me his favorite treasure from the storage unit – the owner’s daily calendar. The initials “L B R” were written on the front of the 2″x3″ leather book. 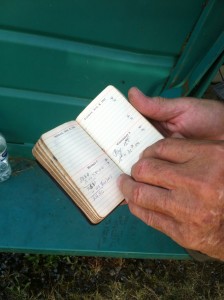 He thumbed through the used pages, pointing out the birthdays of LBR’s friends, the weather in September, the owner’s knowledge of music based on his music critique on one of the pages, gas prices in August, food rations thanks to the on-going World War, and the $15 he payed on August 9, 1944.

For $20, I could buy LBR’s account of 1944. I politely declined, thanked them for their time and shuffled the heavy chest to my car.

When I got back to my apartment, I took a better look at the contents of the box. Much to my surprise, I found some goodies.

The owner left his business cards in the box. L. B. Rozelle was his name. He worked at 1 Beacon Street, Boston, Massachusetts as a metal worker for Rustic Master Company (which explains the copper scraps, nuts, bolts and screws I found in the box.) 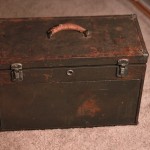 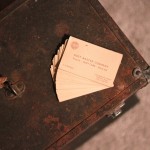 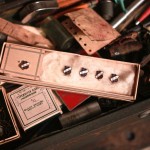 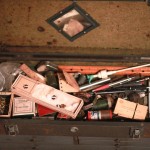 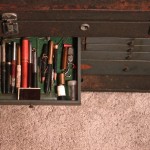 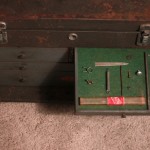 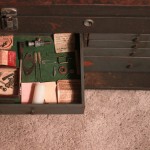 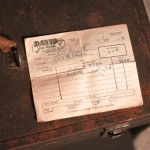 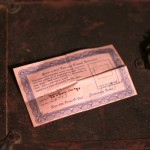 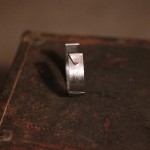 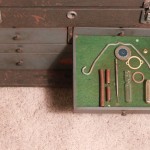 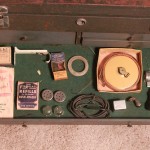 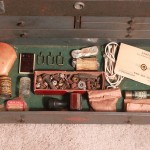 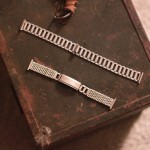 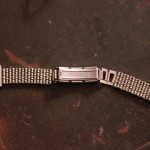 Everything with a stated place of origin has “Made in the U.S.A.” on it. It was a different time, then.

My favorite finds from the chest include three watch bands. The first has “Bretton 12 Kt gold-filled” written on the back. I found the same one on Ebay with an asking price of $195. The second has “Krementz Pat. Oct. 1930” engraved on the clasp. I have not found the same band for sale, yet. The third band has “Berkeley Made in the USA Stainless Steel 5/8” engraved on the inside. I found the same band for sale on Ebay with a starting bid of $99. The seller describes the band as a “U.S. Military Watch Band … for WWII Watches.”

Similar machinist’s chests can bring between $50 and $400. It really just depends on the buyer.

So, for $45, I got a bit of history, some interesting nick knacks and even the potential for a profit, if I sell the watch bands.

I plan to clean the chest up and use it as a jewelry and makeup box on my bathroom vanity. 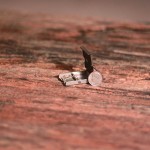 Mouse (or cockroach) trap from a hotel or motel in the early 1950s. According to another customer at the sale, the hotel and motel owners didn’t want the customers to know about their pest problems, so they hid these tiny metal traps in discrete locations. I still have not been able to set it without catching myself. 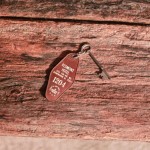 Earl, the seller, told me that this is an original skeleton room key from the historic Redmont Hotel, here in Birmingham. Earl informed me that the hotel was built in 1925, Hank Williams stayed in the hotel the night before his death, a woman was killed on the 9th floor in the 1980s, there is a “ghost dog” and NBA star Kareem Abdul Jabar is one of the current owners.