When life is feeling stale and you need a break in your routine, the Magic City delivers. From 14,000 feet in the air to hundreds of feet under ground, we found the best adventures in the Birmingham area. This is part two in a six-part series. 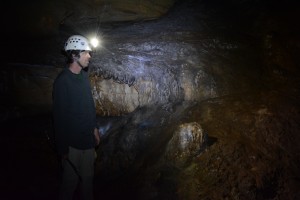 There’s no need to be scared of the dark; bring a headlamp and discover an exotic world deep under the Alabama soil. Many people will never see these caves, but the cavers of the Birmingham Grotto are dedicated both to exploring them and preserving them for the future.

Fennigan Spencer, the Grotto president, said the Tennessee-Alabama-Georgia region is rich with thousands of caves that people flock to from across the world. These caves contain their own fragile ecosystems of shimmering stalactites, bats, salamanders and fish that will never see daylight.

The Grotto is part of the National Speleological Society – from which we get the word “spelunking” – and was created in 1958. There are now around 100 members who attend meetings and take part in group trips. The Grotto organizes one large caving trip per month, with members planning smaller trips all the time.

“A grotto is more about the fellowship than anything,” Spencer said. “In a sense it’s a family that works together.”

There are different caves to suit different tastes: vertical caves that require rappelling, tight spaces to squeeze through, easy walking or crawling caves and underwater pools large enough to swim or float a raft. Spencer emphasized that personal fears should not get in the way; he’s a lifelong caver despite being both claustrophobic and scared of heights.

There is an element of danger to caving, which is why Spencer recommends joining the Grotto. Members have access to proper equipment and training, as well as experienced friends to help them find the safest – and most beautiful – paths through a cave.

“The thing about a cave – especially the extreme ones but all of them, really – from the moment you walk in to the moment you leave, you think of nothing else but caving,” Spencer said. “Because if you don’t think about that next step and only that next step, you’re going to get hurt.”

Since the Grotto keeps most of its locations secret as part of its conservation efforts, cavers who go it alone will also never see many of the caverns right under their feet. It’s a mental and physical challenge, but venturing into a hole in the ground can be a rewarding experience for those who give it a try.