When life is feeling stale and you need a break in your routine, the Magic City delivers. From 14,000 feet in the air to hundreds of feet under ground, we found the best adventures in the Birmingham area. This is part five in a six-part series. 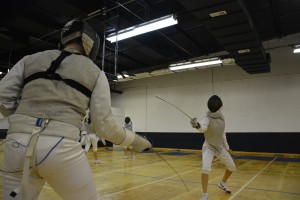 Youth fencers spar with each other during a class at Birmingham Fencing Club.

Can’t get enough of movie swordfights? Bring those scenes to life by learning to fence.

David Arias, the director of the Birmingham Fencing Club, said the fun of fencing is that it’s a physical workout that requires quick thinking and strategy. No two fencing matches are the same, so the sport is all about anticipating your opponent’s moves and knowing when to strike.

“I really love the strategy thinking parts of it,” Arias said. “It’s completely up to you to quickly analyze your opponent and come up with a strategy to win.”

Fencing has existed in the city “as long as Birmingham’s been here,” but the Fencing Club started in 1997 as a nonprofit. In December 1998, husband and wife Yuanjing Wang and Hongyun Sun immigrated from China and began coaching at the club. Both hold advanced fencing degrees, Wang is a Chinese National Foil Champion and Sun took 5th in fencing at the 1988 Seoul Olympics.

“They’re really extraordinary. It’s kind of like getting Michael Jordan to come do your middle school basketball program,” Arias said.

Arias said the club makes fencing affordable, as students can use club equipment and take as many classes as they want for the monthly fee. Many choose to buy their own equipment and travel to competitions around the country, but others at the club simply pursue it as a hobby.

There are about 100 club members now, ranging from young children to senior citizens. Arias said the nature of fencing and safety equipment makes it almost impossible to get hurt, so fencers can focus only on their athleticism and strategy. Often, unexpected people develop a real talent for the sport.