It’s a crisp, fall Saturday morning in the heart of the Magic City, and the elusive sun is far beyond the      horizon, not scheduled to rise for another hour.

As most residents lie asleep in the comfort of their own homes, a sizeable group of runners has converged at the Trak Shak’s downtown Homewood location. Alert and energetic at this young hour, they are ready to embark on lengthy treks that range in distance from seven to 22 miles.

While pounding the pavement at the crack of dawn may not be everybody’s cup of tea, especially on a brisk weekend morning, a dedicated and growing number of people      routinely congregate at the same time every Saturday to start their weekend in the most rewarding way they know.

For some, it begins with a leisurely one-hour trot. For others, it begins with an arduous three-hour grind. But regardless of their varying speeds and distances, all are united by a common factor. As members of the booming Birmingham Track Club (BTC), the runners enjoy a special bond of friendship as they passionately pursue healthy, active lifestyles.
“The Saturday morning group ends up becoming your buddies, your friends,” BTC President Alex Morrow said. “You start off running and then pretty soon, you’re going to movies with them, you’re having dinner, and they become lifelong friends. That’s why running’s so cool.”

The Saturday morning group run represents just one of many club-sponsored events that offer rich opportunities for both aerobic and relational development, providing members with the opportunity to fulfill the club’s original mission.
Founded in 1979 by Dr. Arthur Black, the BTC was launched with hopes of improving the overall health and wellness of Birmingham area residents through running. 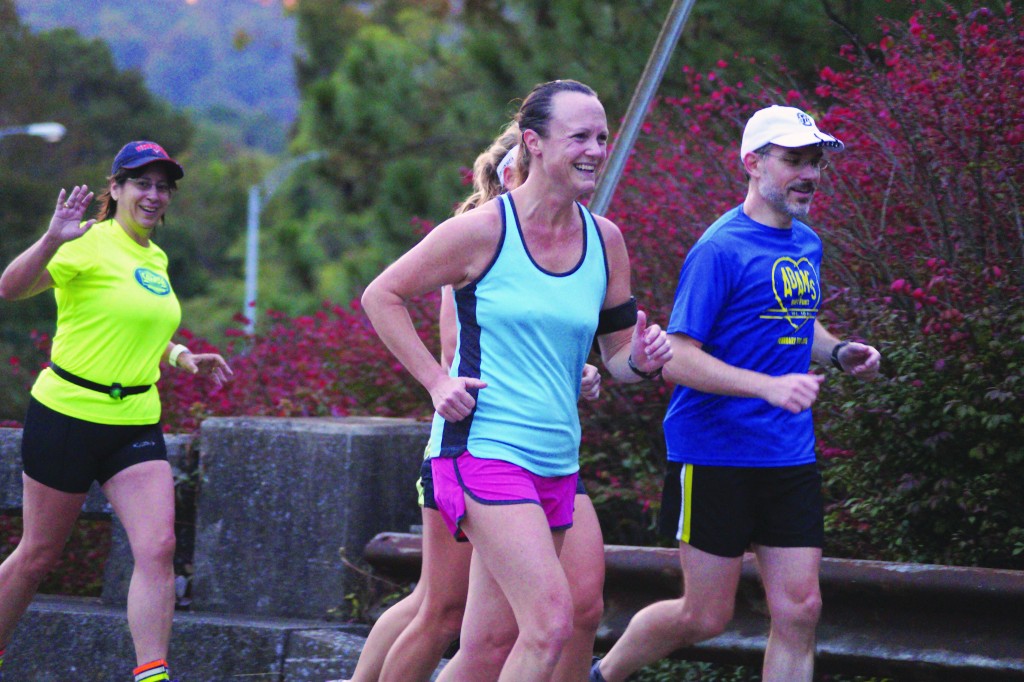 As underscored in the club’s mission statement, the BTC was created “to promote physical fitness throughout the membership and the community, specifically through systematic running and the promulgation of positive health habits.”
Although the club started with only a handful of people, it has grown steadily since its inception and currently boasts 1,300 members.

Much of that membership base, however, is newly acquired, added over the course of the club’s present revival that began just over seven years ago.

“I had always heard stories from the heyday of the Birmingham Track Club when they did all these amazing things and it used to be a big club,” Morrow said.  “When I got involved, there were maybe 500 to 600 runners and the club had dwindled off a little bit, and it just needed something exciting to happen.”

The spark that ignited the BTC’s resurgence, Morrow said, can be credited to former club president Jennifer Andress.

“Jennifer’s a big runner. She’s been featured in Runner’s World and she brought a lot of energy and life to the club, and it really sparked some fun,” Morrow said, “and running has to be fun for you to want to be involved.”

Largely thanks to the added element of fun, club membership has more than doubled since Morrow joined in 2008, making the BTC the largest Road Runners Club of America (RRCA) affiliate in Alabama.

“From her presidency to my presidency, the club’s just continued to grow,” Morrow said. “We’ve instituted more programs, we have more socials, we have more runs and bigger events, and I think people see the value for their dollars now.”

That much is evident.

From free coaching and reduced race fees to an intriguing retailer discount program that includes merchants like Taco Mama and Mountain High Outfitters, there are a number of perks that come with club membership.

Plus, joining the BTC won’t break the bank, as it offers a 50 percent discount to students, military and first responders on the already minimal $24 annual rate.

“That’s a bargain and a half. If you go back to the original guys, Dr. Black and everyone who started the club, you go back to the mission statement, their whole goal was just to get people moving,” Morrow said. “And yeah, we want to have enough money to make sure we can continue the programs we’re offering, but it’s about creating healthy lifestyles.”

One key way of doing that is through building a strong sense of community within the club’s membership. As any former or current runner can attest, there’s motivational power in accountability.

“It’s so much easier to run with a group than to run by yourself,” Mike Ballard, a four-year BTC member, said.
Ballard attends the weekly Saturday morning long runs and various club-sponsored running events throughout the year, noting the sense of community as his favorite club aspect.

“I think just being part of the running community and trying to live a healthy lifestyle with a bunch of other people that are trying to do the same thing,” Ballard said.

In addition to the weekly Saturday morning long runs, the BTC hosts an annual race series, collectively participates in a Triple Crown Half Marathon Challenge and puts on a number of socials throughout the year, including an End of the Year party and a night out at a Birmingham Barons game.

“There’s a lot of different things that take place to kind of foster that community sense,” Morrow said. “We’re doing those types of initiatives to kind of get everybody excited and get them involved.”

As evidenced by the swift pace of growth, coupled with an overwhelmingly positive response from club members, that approach appears to be working.

“It’s just such a great community,” BTC member Kevin Bokus said. “Everyone’s training for similar goals, and it’s just great to have that friendship and support throughout your training.”

Do it yourself: envelope clutch

There is more to Melt than grilled cheese