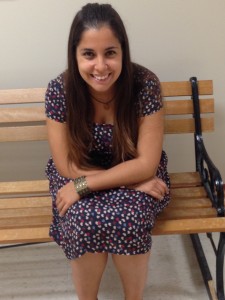 Patry Romero, from Spain, poses at school in Birmingham.

Patricia Romero made her first trip to the United States in 2010. She stayed for almost a year, and then returned in August 2013 and has been here since. Her hometown is Avila, Spain, which is about an hour car ride from the capital city of Madrid. She ended up in Birmingham because of a study abroad opportunity through her work. She now takes classes as well as teaches upper level classes at Samford University.

“Avila is a very small town, so you can walk everywhere, and here you cannot,” Romero said of the biggest differences between Birmingham and her native city. She also cited larger portion sizes for foods in the U.S., especially beverages and sides.

She said that people in the Birmingham area have helped her a lot, especially in their patience as she learned English. She has also found a community of other international visitors to Birmingham. She has friends from many different Latin American countries as well as parts of Asia with whom she has bonded.

Learning English has been difficult, but the U.S. accent was the hardest part for Romero. She took English for seven years in school, and she said it was frustrating to be able to understand a television show but unable to understand people talking to her. She said that she still prefers to speak Spanish when she can.

She said that in Spain, people believe “the typical things” about Americans.

“They eat hamburgers and hot dogs all the time and people are fat. Oh and of course you receive a gun when you open a bank account in Alabama,” she said for example. She said the people know about Alabama due to the song and movie “Sweet Home Alabama” and also “Forrest Gump.”

After completing her study abroad program, Romero will be returning to Spain. She will forever be grateful for the experience she gained during her stays in the States.