In a new, clean storefront with a bottle of fresh juice on the counter, Amanda Blake Turner seems right at home. Turner is a part owner and one of the creative forces behind Sprout & Pour, Birmingham’s first juice store.

Turner has lived in Birmingham for 14 years. She attended nursing school and got her masters’ at UAB before teaching in inner-city Birmingham. Alongside her husband, who is also her business partner, she has launched Sprout & Pour, Birmingham’s first cold-pressed juicery in the Edgewood neighborhood. She is eager to share how juice has changed her health for the better.

“I was sick a lot last year. I was fatigued and nauseous, but I went to the doctor and they said nothing was really wrong,” Turner said. “My sister bought a juicer and suggested I try that, and that was really the only thing that made me feel better.”

“I started looking around and thought, ‘why are there juice bars everywhere but Birmingham?’” Turner said. She began looking for ways to partner with local farms and exploring different recipes. After researching different juicing techniques, she realized that cold press juicing, which her sister introduced her to, is different from traditional, centrifugal-style juicing because it leaves behind a raw, unpasteurized juice with a high nutrition content.

So far, the demand for her business has been high. Turner and her husband started selling bottled juices at Pepper Place Market in April and sold out every Saturday. They then started a Kickstarter campaign to monitor interest in a juice store and raise startup funds.

“We wanted to see what people would say,” Turner said. “As a one-income family, we needed a push to get off the ground.” With incentives like free juice coupons, t-shirts, decals and private “juice parties”, Kickstarter helped Turner exceed her initial goals for fundraising.

As far as flavors go, Turner explores what works and what doesn’t, and plans to change smoothies seasonally with more pumpkin and “green” juices for the fall.

Turner says her juices are good for any age or health range, but particularly for college students in need of an all-natural energy boost. “I wish I had known about juicing in college,” Turner said. “I could have avoided a lot of Cherry Coke and other unhealthy drinks.” 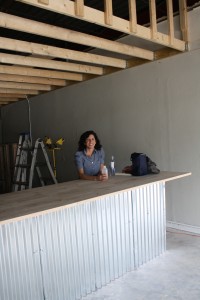 Amanda Blake Turner, owner of Sprout & Pour, at her newly-renovated store in Edgewood.