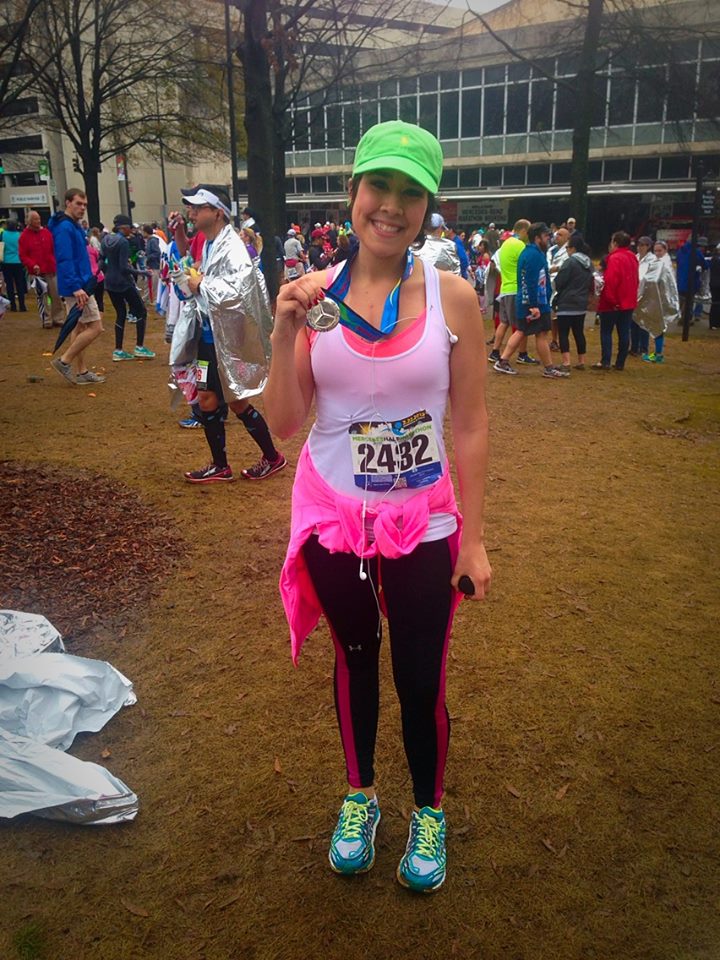 Megan Gagliardi shows off her metal after completing the Mercedes Half on Sunday, February 23, 2015

Thousands of runners flooded the streets of downtown Birmingham this past weekend to test their strength and endurance in the Mercedes-Benz Marathon Weekend. What began as a promise from father to son in a hospital room at UAB, has flourished into a Birmingham tradition. Now in its 13th year, the weekend includes a half and full marathon, a 5k, a children’s marathon, and a relay race.

One of those thousands in the sea of runners was Megan Gagliardi, a senior at Samford University who competed in her first half marathon Sunday morning.  Despite being a college student with classes, Step Sing practices and a social life to maintain, Gagliardi dedicated herself to training consistently, even waking up in the early hours of the morning before class to work in long runs.

“I started training right at the end of November.” Gagliardi recalls. “It was hard to find time! My long distance runs usually started at 6:30 a.m. before I had to go to class.”

One might ask how someone with so much on their plate finds the motivation and dedication for training. “My motivation was partly to prove to myself that I could do something like that,” Gagliardi says. “Never have I ever been a runner and so for me to be able to tell someone that I did this is a huge accomplishment.”

But that wasn’t her only motivation. Three and half years ago, Gagliardi was hospitalized for Dilated Cardiomyopathy, a condition that leaves the heart weak. Nine months later, she was blessed with the special, life-saving gift: a heart.

“I have never met his family, but according to their letter, [the donor] was a loving, young boy who loved life and sports. I know losing him was probably one of the hardest things to happen [to the family], but I wanted them to know that I love and appreciate this wonderful gift that’s been given to me,” Gagliardi says.

Gagliardi came back stronger than ever, and now 13.1 miles later, she is able to check a huge accomplishment off her bucket list. When reflecting on her experience during the half, she remembers the difficulties she endured and the mental blocks she overcame.

“The hardest part of the race was to keep running. By mile 10, I wanted to stop and start walking,” she says. “One trick to getting through the mental block is to stop comparing yourself to other runners. There’s always going to be someone who is a faster, better runner than you.”

For more information about the Mercedes-Benz Marathon Weekend, you can visit mercedesmarathon.com.