As Oct. 27 approached, faithful T-Swift fans anxiously awaited the songstress’ new album. Fans and non-fans alike anticipated a new bundle of heartbreak, revenge, and cryptic lyrics delivered Taylor Swift style. We heard a small taste of “1989” with two pre-released tracks, “Out of the Woods” and “Shake It Off.” But on Oct. 27 we got the whole album and it was a delightful surprise.

As usual, “1989” is a glimpse into Swift’s diary and failed relationships. After the opening song, “Welcome To New York,” an ode to Swift’s new home and her love affair with the Big Apple, the album takes listeners on a journey through the past two years of the seven-time Grammy winner’s life. Sure, “Shake It Off” is a fun, get-up-and-dance song but Swift truly shines in heartfelt songs like “Style,” “Wildest Dreams,” and “Clean.” “Clean” is the perfect end note to an album about past mistakes and relationships. In “Clean,” Swift admits that heartbreak hurts but she has moved on. It provides closure for the failed relationships mentioned in the tracks earlier in the album.

Swift’s new tracks demonstrate her ability to call out what many people have criticized her for: her varied dating past. It’s as if she decided to admit the truth and expose her past mistakes rather than the mistakes of those she dated. In “Blank Space” she sings “Got a long list of ex-lovers/They’ll tell you I’m insane/’Cause you know I love the players/And you love the game,” and “I’m a nightmare dressed like a daydream.”

Although “1989” includes several songs about her exes, as should be expected from Swift, they are not blatantly negative about her former flames. The songs also come in a refreshing sound that is distinctly pop. Previously, Swift still considered herself as part of the country genre. But we all know she left her country sound behind with the teardrops on her guitar. In an interview with Rolling Stone magazine, Swift admits that her last album, “Red,” “straddled the line between country and pop.” For “1989” Swift made a deliberate decision to make an album that would be strictly categorized as pop. 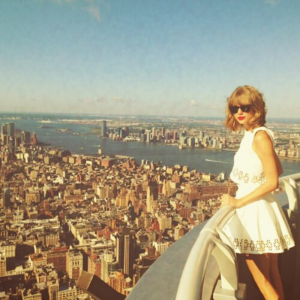