An Audience of One
Prev Next
Search

In Alabama, football is God. It affects nearly everything about people’s lives, from the way they talk to the color schemes of their homes. So, it stands to reason that those involved with football are perfectly positioned for a lifetime to reign in the limelight. But Barrett Jones wants no part of that kingdom.

“People around here know like, our third team — which is what makes it great, but I probably won’t follow it that closely after I’m gone,” Jones said.

Jones, a Memphis, Tenn., native, is a two-time national champion offensive lineman for the University of Alabama and the 2012 Outland Trophy winner, which is given to the nation’s best interior lineman. His accolades and awards are enough to make even the most humble of men green with envy, but he’d be the last person to tell you that.

“I never expected it to be this big. I’ve been really blessed, and it’s been a really cool experience. Hopefully it’s not over yet, but if it is, then that’s fine, too.” 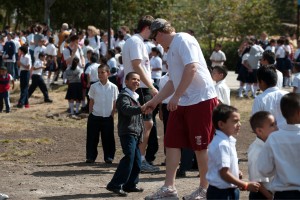 Aside from his 6-foot-5 stature, his humility is the first thing you notice about him. He’s quick to safeguard his words with witty banter and over-the-top examples to ensure he doesn’t come off the slightest bit conceited.

“I’m pretty open. I think most people know what I stand for. The media has done a lot with that. I try to be open, and if anyone asks I’ll gladly tell them.”

Between completing his undergraduate accounting degree in three years with a 4.0 GPA, going on to grad school, studying for the CPA exam, and, of course, his blistering football schedule, Jones still manages to stay active in Campus Crusade and in the mission field.

“Last time I went home [to Memphis] I brought 40 people with me [for the Campus Crusade men’s retreat]. So, my mom says that doesn’t count,” Jones said with a laugh. He’s been to Haiti, helped with rebuilding Tuscaloosa after the tornadoes in 2011, and spent this year’s spring break in Nicaragua.

“Still, I honestly hate doing interviews about it [his mission work], but I think it’s good exposure for missions and opens doors. I don’t do it because people are looking at me. I really just have a heart for it, and I love missions. I just love going places and helping them and sharing the Gospel with them. It’s just such a cool thing. It’s rewarding for myself, too. Like for me it’s better than going to the beach. I love it. After you go once, it’s hard not to want to go back.”

Growing up in a distinctly Christian home also set the tone for how Jones goes about his daily activities.

“Always try to remember what you represent,” Jones said, “To whom much is given, much is required. I may not always feel like giving them an autograph and a picture, but that’s just who I stand for. Part of being a Christian is being nice to people, in plain terms. And it’s not like I’m always hounded by the paparazzi. Cause that’s not how it is. But it’s learning to deal with the fact that people are always watching you to see if you’re going to do the right thing. That’s not the reason you do it. But you have to be conscious of everything you do.”

So, whether he’s in Alabama’s media room after practice or being interviewed by ESPN, he is always mindful to give credit where credit is due. 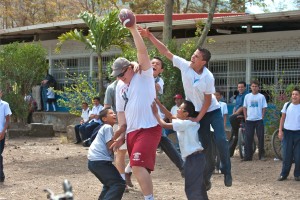 This is part of the reason why Jones has decided to forego the NFL draft in lieu of his senior season for the Crimson Tide this fall. He wants to give back to the organization that has molded him into the award-winning player that he’s become.

“God’s really laid it on my heart this year,” Jones said. “It’s one of the main reasons why I stayed. To affect our team. Me and another guy have started a Bible study for the team this year. A lot of guys come, and it’s really awesome. I prayed about it a lot, and I knew that I’d have the opportunity to have an impact on people. One that I wouldn’t have on a pro team. I felt like there was a lot left to be done here, and I wanted to hang out with Harrison [his younger brother, and upcoming freshman tight end for Alabama] another year. I really just love it here. And the NFL’s gonna be there next year. I try to not get in any hurry, and I want to enjoy my college experience before real life hits.”

As far as planning out exactly what his next step should be, he said, “The way I see it is, I haven’t worried about plans so far, and God has blessed me beyond what I could ever dream of. So, I guess I’m just gonna stick with that plan. God has a plan for my life, whatever that may be.”

Whether life after college holds a desk job as a CPA or a spot on a professional football team, Jones is perfectly content in the present.

“Honestly, people probably won’t remember me in 50 years except for the plaque that’s already in the complex,” Jones said with a laugh. “More so than people remembering me, I just hope that I made an impact on someone. I feel like God’s given me a really unique platform, and I just hope that I use that platform for His glory and not mine. I don’t want people to walk away and say, ‘Man, that Barrett Jones is an awesome guy;’ I want them to say, ‘Man, that Jesus is an awesome guy.’”