Bright Idea: The Story of O’Henry’s Coffee
Prev Next
Search 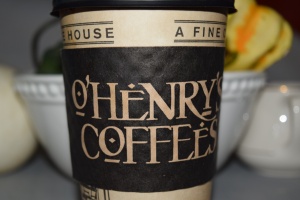 “I couldn’t find a truly great cup of coffee in Birmingham.” These words, spoken by Dr. Henry Bright of Birmingham, launched him into a coffee obsession that resulted in the birth of O’Henry’s Coffee in 1993.

At the start of his coffee craze, Bright was working as a successful orthodontist in the Birmingham area. Bright became interested in coffee after recognizing a need for a place where people could meet and enjoy one another’s company.

Bright’s passion carried him across the country, as he studied different techniques and roasting processes in order to be successful in the industry. Bright was fascinated with the chemistry of coffee, beyond the taste, and wanted to control all steps of the process, starting with the coffee bean.

He bought an espresso machine for his home and after learning how to roast, source, and blend coffee, Bright opened the original O’Henry’s in Homewood with a “little red roaster” in the front window.

The story began when Bright saw a need for a gathering place and wanted to do something about it. He envisioned a coffeehouse as a place where cross sections of society could meet and feel comfortable.

Bright understood the dynamics necessary to produce a sense of hospitality, comfort, and home in a coffeehouse. O’Henry’s conveys this mood through warm colors and a welcoming environment.  “We love to hear people say meet me at O’Henry’s,” said current owner, Randy Adamy. O’Henry’s strives to make people feel comfortable in coming and staying.

O’Henry’s was a hit from day one. This business venture involved a great deal of risk, as Bright sold his coffee for $1.50 in 1993, when you could get coffee elsewhere for a quarter. Yet, people saw a difference and appreciated Bright’s innovative idea. Bright was revolutionary in bringing specialized coffee to the people of Birmingham.

“Dr. Bright was the type of guy that would make sure he succeeded, he would do whatever it took,” said Adamy. O’Henry’s introduced the trend of artisan roast, setting the standard for what is expected out of a quality cup of coffee.

Jenn Russ, employee of five years, described Bright as humble, soft-spoken, friendly, and a man who loves coffee and getting to know people. In the coffeehouse industry, “It is all about the relationships and Dr. Bright knew that,” said Adamy.

O’Henry’s employees make an effort to learn people’s needs, beyond a cup of coffee, whether it is the need to be heard or to slow down. “That is the most important thing we do, we just happen to be selling coffee,” said Adamy.

When Bright was looking to sell the company in 1999, he met Adamy through a mutual friend. Adamy said Bright wanted someone to keep the standards high, committed to producing something that would enhance the community. For Bright, it was never about money, and to Adamy, “profitability is something that happens when you do something right.”

Under Adamy’s ownership, O’Henry’s has just expanded on the precedent set by Bright. With four O’Henry’s across Birmingham and the roasting business booming, the franchise has managed to remain true to its “mom and pop” origin.

Russ appreciates the small-business aspects of the company and the traditional roots, which have sustained O’Henry’s and allowed it to flourish. “I like what it was founded on,” shared Russ. She described the reward of watching the coffee culture evolve and morph, while O’Henry’s hasn’t changed.

Bright, who will turn 81 this year, is still a vigorous and sharp businessman and consultant of O’Henry’s. There are regulars today who still come in and talk about him. One example is a group of men that have been coming every week since the opening in 1993. They call themselves the “has beens” and have a reserved table where they meet each Thursday morning at 9 a.m. “They are like antiques, we have to dust them off, they are part of the atmosphere,” said Adamy.

Regular costumer, Zach Eaves keeps coming back for “the atmosphere, seating options, and Southern Pecan Crème Coffee.” Everyone has their reason for coming back, and for many it is more than just coffee. The “notebox” on the mantle of every O’Henry’s serves as a testament to the memories made there, filled with notes on scrap paper and tokens of gratitude from loyal guests. Adamy believes regulars come back for “the same reason we all look forward to Christmas- tradition, comfort, family, friends.”

There is humility about Bright and the O’Henry’s story. “If you were to say to Dr. Bright, ‘You are too humble,’ he probably wouldn’t say anything,” shared Adamy. Bright started something unique and so it remains, coffee and community since 1993.

Fun ways to exercise in Birmingham