“I love music and I want our label to have all the things that I grew up being inspired by: feeling magic, feeling taken out of your ordinary life to somewhere else. I think if you do that, you inspire other people to do the best at what they do.”

A look inside the Communicating Vessels office won’t show you much. There might be a record player spinning the quiet sound of a vinyl record in the background. You’d probably see the posters and albums of the budding record label’s bands lining the walls.

The small Woodlawn building may not boast much furniture, but the people inside display their love for Birmingham’s music and arts all throughout the community. 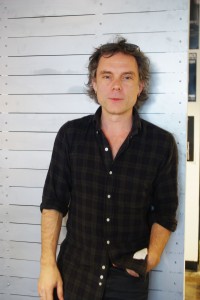 Jeffrey Cain grew up knowing music. The Mobile, Ala. native and some of his friends from Birmingham started a band called Remy Zero and they were signed by a major record label. They hit it big when they moved to California. Aside from their three full-length albums, their song, “Save Me,” was chosen for the theme song to the hit TV show Smallville, and their song “Fair” was on the Garden State soundtrack. The band toured and made records for nearly 10 years until 2003, when they stopped touring and “decided to take a break from each other,” Cain said, with a smile on his face.“We had done it for so long that we needed a break to survive, to figure out who we were.”

Cain stayed in Los Angeles for several years, and he began doing music in film and television. He had the opportunity to write the theme song for the TV show Nip/Tuck. “I started doing that just to stay off the road, and to exercise a different way of not being in a band,” Cain explained.

He then began producing and collaborating with other artists and eventually moved back to Birmingham four years ago. “I wanted to experience the South again,” he said. “I knew I’d find great music here. I fell in love with bands like Wild Sweet Orange and the Great Book of John.”
Cain had been waiting for the right time to begin the process of creating a record label, and as he got involved with local bands he realized that his time had come. “I heard so much music that I loved. I thought, ‘Okay, I guess it’s my turn to do it now.’”

Cain produces and records a lot of the records, something that allows him to nurture the bands longer and work at getting them heard. “Of course, growing up in Alabama, I never saw that as a kid, and there were all these other scenes that did: Chicago, South Carolina, Georgia,” he said. “All of these places had local labels that helped get the music heard.”

The bands at Communicating Vessels aren’t all from Birmingham: there are artists from all over the world, from places like Australia and New York. He chooses people and sounds that really resonate with him. “We’re just music fans, so we find things we really love and believe in and think needs to be heard and championed.”

He had the name “Communicating Vessels” in his head for a while. The Great Book of John was the first full-length record to come from the label, still only a year old. Cain said the name came from a surrealist book by Andre Breton that he read years ago.

“It’s also a scientific experiment that consists of a set of tubes that were connected by a tube at the bottom,” he said. “If you filled it with water or fluid, that all the tubes, no matter what shape or size, would even out. One would influence the other. That was the basic  idea behind what I think as artists, we do with each other. It’s more of that community sense. We’re all kind of connected universally.” 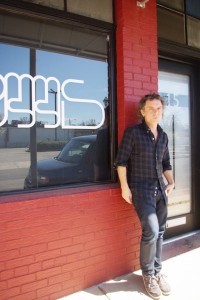 The Communicating Vessels website is really the foundation for what they want to be. An umbrella for music, the website lists artists who are and aren’t on the label, as well as music from friends and other people that Cain and the Communicating Vessels team thinks needs to be heard. It helps people hear things that they might like. “We’re like an art gallery,” Cain said. “We curate music.”

This curation leads to new sounds and acts.

“I’m trying to grow it as organically and pure as I can. I won’t compromise. I need people to trust our integrity and our name that when they get it. It’s something that’s forward moving, thoughtful, and truthful. Something that we think is really pure, instead of manipulating somebody to buy something.”

Cain has grown up knowing Birmingham and the music scene here. He’s friends with the owners of Bottletree, a place that has nurtured the city’s music scene for years. For Cain, people are excited to have anybody else who is willing to give their time to help music be heard. “I can only do so much,” he said.

There are three other labels in Birmingham that are helping things get heard in the city as well. “We all need each other. It’s healthy competition for the musicians, labels and artists.”

“That’s what we’re trying to do: get everyone excited and be supportive,” Cain said. “I want people to see the amazing work that’s coming from Birmingham.”