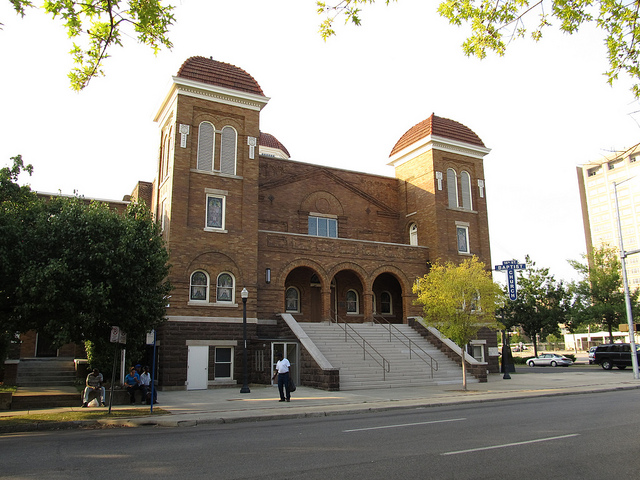 Just 6 years old on the fateful September morning of the 16th Street Baptist Church bombing, Marietta Autrey-Roberson’s life was indefinitely changed. Though Roberson wasn’t actually in the church at the time of the bombing, she recalls the aftermath and the chaos rampant throughout the city.

“I always went to church with my aunt, but she worked one Sunday out of every month, and it just so happened that the Sunday of the explosion she had to work, so I wasn’t there,” Roberson said.

Perhaps another reason she felt the turmoil of the explosion’s repercussion so closely was another bombing in the city, which hit a little closer to home.

“I was very aware of the church bombing, even as a 6-year-old, because it had happened to my own family first,” Roberson said.

“My grandparents had just built a house on Center Street, better known as Dynamite Hill,” Roberson said. “The day after they moved into the house, bombers cut a hole in the front screen porch and stuck a stick of dynamite in it. My grandmother was the only one home and she was in the very back of the house when it happened. She did survive it.”

The Rev. Arthur Price Jr. has been the senior pastor of 16th Street Baptist Church for the past nine years. When he came to the church in 2002, he had a vision of a Christ-centered church body that maintains and preserves the church’s civil rights history and tragedy.

“I wanted to give the community a chance to have the church as a strong civil rights shrine, but I wanted a Bible-centered and God-centered church first and foremost,” Price said.

Walking into the beautiful Byzantine-style church building, one is surrounded by stained glass windows and a spacious sanctuary. The original building was constructed in the 1880s as one of the first African-American churches in the city.

In 1911, T.C. Windham, a local black contractor redesigned and rebuilt a Byzantine-style building which cost approximately$26,000.

Throughout the 20th century, many prominent African-American leaders came to speak at 16th Street Baptist, including W.E.B. DuBois and Mary McLeod Bethune.

The church remained an active part of the Birmingham African-American community through the decades, but on a quiet, average Sunday afternoon in September 1963, the lives of every member of this peaceful church would change forever.

A bomb, planted in the church basement by Ku Klux Klan members, killed four young girls and injured 22 other church members. Some historians say that the bombing of 16th Street Baptist, coupled with the assassination of President John F. Kennedy only two months later, would light the fuse for the explosion of the civil rights movement of the mid-1960s.

The church’s strong civil rights history is prevalent, but not overarching in the everyday life of its church members. The sermons are loud – full of soul and song. Shouting a gospel-centric message to the congregation with occasional retorts of hearty “Amen” from the pews, Sunday mornings are anything but dull. Cushioned red carpet adorns the floors of the church sanctuary. Warm and inviting, the pews slowly fill with congregants as the large room’s acoustics surround the audience with the music of the choir, organ, brass section, violin and bass.

“We are to be the light of the world! We are to know the purpose our God has for us in this world!” the Rev. Price shouts from the pulpit. “It is no accident that every one of us is here today!”

Roberson closes her eyes and lifts her hands in response to the Rev. Price’s words. Roberson has been a member of 16th Street Baptist since she was a little girl. Now-a-days, she greets visitors with a warm smile and a genuineness which is rarely seen when welcoming total strangers.

Roberson shares a hug with old friends and strangers alike as people slowly file into the sanctuary. A testament to the church’s sense of love and gospel-centered service, Roberson describes 16th Street as her home body and family.

“I’m a breast cancer survivor and a stroke survivor, and we have a lot of cancer survivors in the church,” Roberson said. “I think that’s why it’s such a lively place to be, because everyone there has a testimony to God’s love.”

Roberson suffered a massive brain hemorrhage in the mid 1990s, which rendered her partially blind. She has since retired from her job and is pursuing a career in custom clothing designs.

The church is filled with a genuine love for Christ, as Roberson describes it.

“What you see on Sunday morning really is coming from the heart. It’s not fake. I can’t even sit down on Sunday mornings there, I just feel the need to stand on my feet and praise the Lord,” Roberson said.

16th Street Baptist Church’s rich civil rights history lives on through the lives of its church members and volunteers everyday. The tragedies and triumphs experienced throughout the past 50 years have only served to strengthen the mission and monument of the church itself.