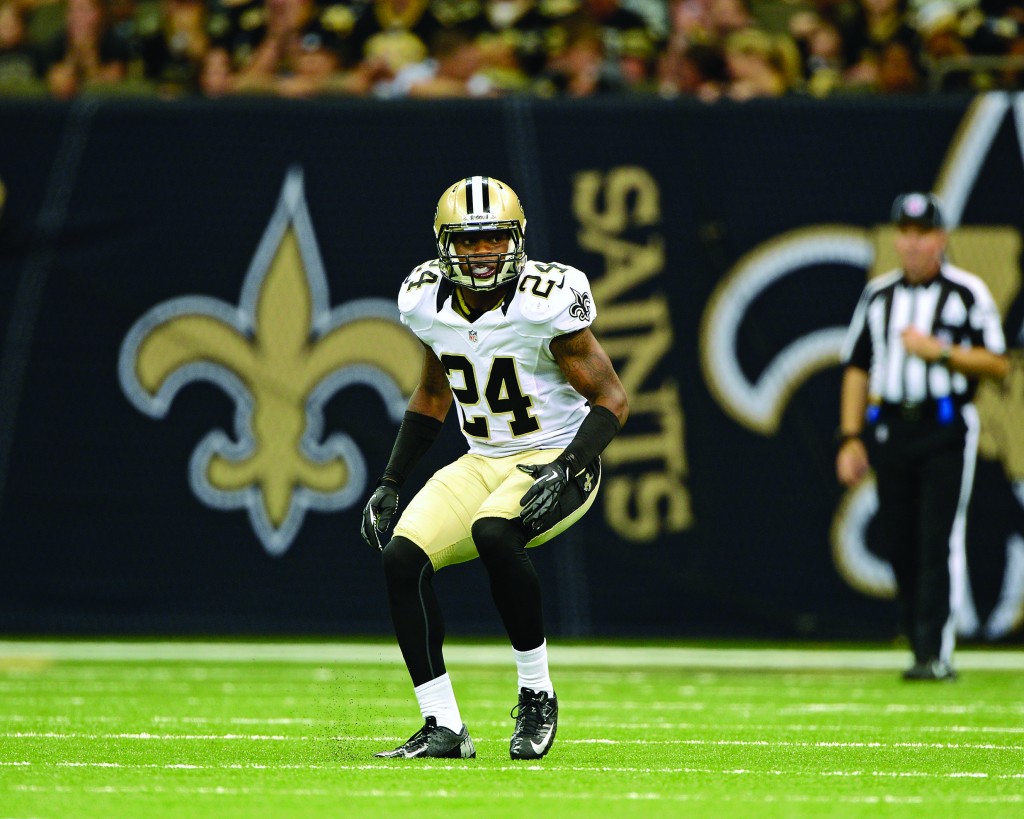 In the spring of 2008, Dunwoody, Ga. native Corey White signed on to play football at Samford University in Birmingham. Little did White know that four years later, he would be trying out for NFL coaches and scouts, eventually becoming the highest draft pick in Samford history and playing professional football for the New Orleans Saints.

White, a 6-foot-1, 205-pound defensive back was drafted as the 162nd pick overall, impressing the Saints with his ability to cover receivers in big-game situations.

“[On draft day] I was at my house in Atlanta, watching on TV,” White says. “When they called I couldn’t hear anything because my family was so loud. I didn’t really even know who called until they showed my name. I almost broke into tears.”

Getting to the NFL from a school such as Samford is no easy task. In fact, only one other Samford product, Cortland Finnegan, has played at the professional level. However, the school is becoming more successful in producing professional football players; a big part of that was when Samford hired Sam Shade as cornerbacks coach in 2009.

Shade, who helped prepare White for his NFL tryouts, spent nine seasons as a professional football player and brought a fresh perspective to Samford’s coaching staff.

“When Coach Shade came in and took over the defensive backs with his pro experience, he really helped me learn how to be a better player and a better person,” White says. “He knows what it takes to survive as a pro athlete. He’s got four children and a beautiful wife. At Samford I was able to sit down and talk to him about life as well as football.”

White recorded 31 tackles and an interception in his rookie season in a backup role with the Saints. He started four games as a fifth defensive back, including in a nationally televised game against the Denver Broncos.

His first NFL interception helped the Saints to a 31-27 win over White’s hometown team, the Atlanta Falcons. White’s interception came early in the third quarter and led to a Saints touchdown.

“The first time playing my home team, I was very prepared,” White says. “I got several tackles and a key third down stop, and then that interception. It was very special playing that kind of game against the Falcons.”

A knee injury cut White’s 2012 season short, but now that he has a year’s experience under his belt, the second-year defensive back is ready to take more of a leadership role on the 2013 Saints defense.

White hopes that his success, along with the experience of Samford’s coaching staff, will help bring more attention to his alma mater.

“What I do and what they see Nick [Williams, a fellow Samford football player] do is an example,” White said. “We’ve got the talent, now we need to get the scouts coming out. Maybe in a couple of years, once we put someone in the league from here on down, teams will notice.”

Understanding the Myers-Briggs Type Indicator (Part 1/4): The Basics & the Dichotomy of Energy

A Requiem and a Revival: Gip’s Place