Q & A with Ruth Blackburn 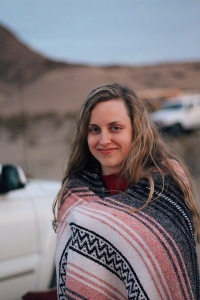 My name is Ruth Blackburn. I am a junior from Birmingham, Alabama. My major is Foods and Nutrition with an Art minor.

I think of the cultural differences between Asia and America. My best friend went to China for 6 weeks and I think of the stories of squatty potties and riding bikes all around the cities. I once read that middle-aged men in Asia are at a very high risk of suicide because of pressure to succeed and do well in the workplace.

The kindness that people show to each other even when they are strangers and do not know each other.

I have never been affected by culture shock very much when I go to different countries. I think I am very easy going so the differences between countries do not shock me or bother me that much and it takes a lot of effort for me to pick out the differences and things that bother me or that I like better about one country.

When I studied abroad in London last semester, there seems to be an unspoken rule that you do not talk to people who you do not know. Especially on the Underground transportation system when you are riding, people do not talk to each other at all. I actually liked this because often times I do not like making small talk or talking to people that I do not know. We always talked about how if we had the Underground system in America, it would be so much louder because everyone talks to people that they do not know.

Q & A with Alexis Hawsey