Finding your happy place: the beauty behind Amy Head Cosmetics
Prev Next
Search 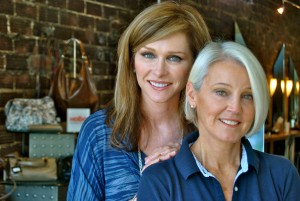 “I’m just sneaking in the back,” a customer jests as Lynn North, the owner of Amy Head Cosmetics in Homewood, warmly greets her with a hug. “Oh, that’s what it’s there for!” Lynn exclaims, “I’m sorry I don’t have on my lipstick, you caught me finishing lunch! Come on in, and we’ll see what Amy can do for you.”

That’s the way that Lynn treats all of her customers. It’s part of what makes Amy Head Cosmetics different from other makeup lines and cosmetic studios. That, and their theory that makeup is not meant to hide or cover up a person. This theory is what Mississippi native Amy Head, founder of Amy Head Cosmetics, had in mind when she began her makeup line in 1987 after seeing first hand the negative effects of poor makeup.

“It’s not finding what’s wrong, it’s seeing the beauty, and then painting,” says Amy. “It’s seeing the beauty first…we can explain what’s pretty and why, so that people feel that authenticity that is there. When [people] have that type of validation before the makeup, it’s just huge.” A model in her early twenties, Amy was tormented by an abusive childhood and blinded by a shame that masked her physical beauty. She had always been artistic, but was unaware that her gift was special. Then, one day during her modeling career, one move would change her life forever. “I could not see my beauty. The shame was the veil; I could not tell that there was something special there. And, I had the worst makeup job ever,” says Amy. “So, I said ‘give me that [brush]’, and I never turned back.” From then on, Amy wanted to put makeup on everyone. Her husband, Harold Head, is a photographer, and Amy would have him photograph her clients’ faces for her to study. From there, the self-taught artist developed her own line in Ridgeland, Mississippi at the age of 26.

So, how did Amy Head Cosmetics get to Birmingham? Says Lynn North, “I thought, ‘What a great business opportunity!’ and I also liked Amy’s philosophy. It’s not just about selling makeup. It’s about empowering women…and helping women really feel good about themselves. I really do think that’s what we do. It’s not just putting makeup on somebody.” With that, Lynn opened an Amy Head Cosmetics studio in Crestline in the fall of 2004. While it was great for the small community, within a few years, the studio had reached its full potential in that village. In December of 2009, Amy Head made the move to Homewood, just as the economy took a turn for the worse. “It’s been a tough time for sure,” says Lynn, “But I’ll tell you, I think our reputation has kept us on top. The fact that we aren’t just about selling makeup, that we love to work with that 7th grader, that we can also help a tired young mother. And people know that and talk about that.”

The more time one spends in the little studio on the corner of 18th street and 29th avenue, the more one understands Lynn and Amy’s vision. From the crisp, soothing décor, to the upbeat but hardly overwhelming background music, the place exudes joy, comfort, and beauty that goes beyond a pretty face. It is evident that each client comes in to buy a product, but leaves feeling inwardly radiant and outwardly rejuvenated because of the measures that Lynn has carefully taken to ensure that each woman feels special enough to recognize the beauty that the ladies of Amy Head saw even before the makeup.

“From young [girls] learning makeup to an older woman who doesn’t want to be stuck in a rut…we are makeup for all ages, and we have the expertise to do that,” says Lynn. “That’s why we call it empowering women…we want you come in and sit down so that we can teach you.”

“My favorite thing,” explains Lynn, “is seeing people and making people happy. I feel like that’s what we do, we make people feel good. It’s a happy place.”

4 Birmingham families share how childhood cancer has changed their lives