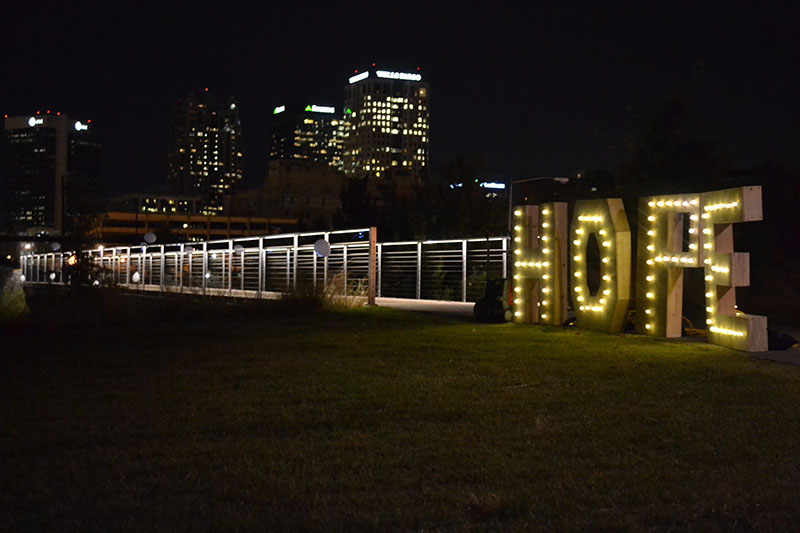 “Hope” was the theme of Freedom Night. The word against the backdrop of the skyline allowed for attendees to really understand the heart behind the night.

At this moment, more than 27 million people worldwide are enslaved. I-20, the highway that stretches between Atlanta and Birmingham, is America’s most used avenue for sex trafficking. Girls of all ages are being taken and forced to participate in brutal and alarming modern acts of slavery- right in our backyard.

To help raise awareness, Sonya Hornsby, a Birmingham local, was inspired to plan an event to help educate people about human trafficking in the United States and around the world. Hornsby believes that by making others aware and providing a space for advocacy, the “27 million” become much more than just a vague number, they become real people who are in need of rescue.

“I think it’s easy to think that we might not have resources or the platform to make a difference, but we all have a voice, and that’s what I want people to know and grasp” Hornsby said.

There are anti-trafficking organizations throughout Birmingham fighting for the freedom of all people being exploited or held in bondage by the sex industry. While all of these organizations have different tactics, they share the same underlying goal: to grant freedom and restoration for those being held captive.

Last Friday, October 19th, 2013, many of these organizations gathered together to take part in Freedom Night- a night aimed to shine a light on the reality of modern day slavery. Several different bands were featured, including Sister Hazel and Steve Moakler, and many different people spoke about the potential victory that can come with perseverance in the fight against sex trafficking.

“I thought it was cool to see so many different types of people and organizations supporting the anti-trafficking movement. I’ve always known about human trafficking, but it going on so close to where I live makes it so much more real,” said Caroline Dill who attended Freedom Night.

To learn more about the anti-trafficking movement, and how to get involved, go to http://the-wellhouse.org/