Based upon Gillian Flynn’s best-novel of the same name, “Gone Girl” tells the story of Amy Elliot Dunne, whose disappearance puts her shifty husband, Nick, in the hot seat with both the police and the media. Following his 2011 adaptation of “The Girl with the Dragon Tattoo”, director David Fincher brings his usual perfectionist style to this seemingly melodramatic tale. 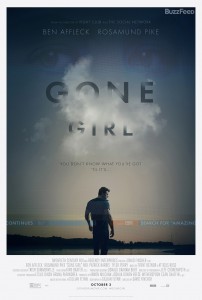 Adding “Gone Girl” to a filmography that includes the likes of “Dragon Tattoo,” “Seven,” and “Zodiac,” it is safe to assume that Fincher is drawn to darker projects. And his visual style caters to the tone and atmosphere of these despairing affairs. Yet, “Gone Girl” is probably the funniest movie Fincher has made. Judging from the brief synopsis above, there should be nothing funny about “Gone Girl” at all. Yet the two-and-a-half hour film is filled with comedy—most of it stealthy and sneaky, but also a lot of it outright. This is because, at its best, “Gone Girl” is a satire of several institutions, namely the endless media cycle and marriage.

Headliner Ben Affleck and Rosemund Pike, who play Nick and Amy Dunne respectively, give two incredible performances. Affleck, who looks suspiciously like the infamous wife-killer Scott Peterson, brings the necessary amount of humanity to his role. It is undoubtedly one of the best performances of his career. But, it is Pike who steals the show as Amy. Without giving away too many spoilers, she is the reason to see “Gone Girl.” She gives an award-winner caliber performance.

Both fans of the novel and newcomers to the material will enjoy “Gone Girl.” In adapting her own novel for the screen, Flynn does a fine job of staying close to the great source material, but also making necessary changes to help the story flow better on screen. With “Gone Girl,” it seems award season has come early this year. The movie is brilliantly filmed, funny, engaging, and impressively acted. It is definitely one of the best pictures of the year.

“CrossFit is Not a Religion”

From the Pulpit to the Picket Line