I opened the beautiful, old wooden door underneath the faded Coca-Cola sign, and began walking up the staircase before me. On each stair, there was a word and each word connected to form a poem. I wanted to stop and read what the stairs were telling me, but, at that moment, I heard a muffled “We’re up here! Take a left when you get to the top” from somewhere beyond the staircase. So I snapped out of my entranced state and ran up the last few steps.

When I reached the top, I found a 1950’s kitchen and a side room containing a worn out, vintage Coke machine. It was the kind of place that you thought only existed on movie sets. The sun pouring through the windows, a can of perfectly splattered paintbrushes sitting in the sink, and a mason jar of homemade soup on the counter perched next to a loaf of bread and an orange, obviously Tres’ lunch for the day. 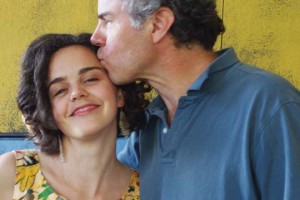 “Thank goodness I have my camera,” I thought to myself. Then, remembering that I was not alone, I quickly ran into the next room, ever mindful that southern ladies should not snoop, unless she was certain to remain uncaught.
“Hey!”, said Lillis Taylor. “This is my dad, Tres’ Taylor. And this, is his gallery,” she added as she led me into a large open room full of windows and sunlight bouncing off of the tarnished wooden floors.

Tres’, who was comfortably leaning on his shoulder in the doorway with his hands in his pockets, casually walked forward, took my hand, and gave me a sincere, sideways smile that could only come from a love and understanding of people. It was like looking into an older, masculine version of Lillis. The dark hair spiraling around an optimistic face, the up-turned, friendly nose, the dark, round eyes, and that same sideways smile.

“You gotta see this,” he said with his back turned already on the “tour”. He then proceeded to tell me about the history of this building, which is well over 100 years old and had once served as a meeting place for the Odd Fellows. He effortlessly explained that the Odd Fellows were essentially the men who were not allowed to be a part of the Free Masons. It was much like today’s collegiate fraternal organizations. Apparently, Tres’ explained, when the Odd Fellows left, they left in a hurry because they left all of their old costumes, memorabilia and historical documents behind.

I took a moment to glance around his gallery, strewn with his playful artwork. There were paintings and tarps and all sorts of things cast about in that beautifully chaotic manner that only artists possess. “A biochemist, huh? This should be good,” I thought.

I turned on my tape recorder, and for the next hour, sat awe-struck as Tres’ Taylor began to unfold the magical, deeply spiritual, and captivating story of how he took the advice of an old folk artist in Georgia, left his job in San Diego and wound up in Birmingham making his own masterpieces from tar paper, but not before a few trips back and forth from Japan. 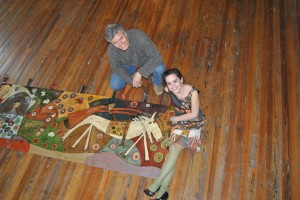 Tres’ was obviously passionate about what he did, but, not necessarily about the art itself it seemed. In fact, it appeared that his masterpieces were almost secondary to the way that painting made him feel.

“My first painting didn’t take that long to do,” said Tres’, “but it was such a powerful experience, and it was an experience of healing because I found myself not thinking. I was just painting, and that is what creation is about. The act of creativity is supposed to really pull you in, and I found myself experiencing joy. Of course when you experience that, you’re not going to stop. So, this really became an obsession.”

Lillis sat and listened tenderly as her dad told about his adventures and the way that the world worked together to help him become the artist he is today. Although she lived the story first-hand, and knew it by heart, she looked at her father with a sweet mixture of adoration and fascination as he told his story. Although Tres’ is in his 50’s (and actually looks and acts much younger), there was a gentle, protective air about Lillis as she listened to her dad. She occasionally corrected him as he told his story, or added in a part or two that he may have forgotten. She also reminded him on more than one occasion to be careful as he excitedly dug around in nooks and crannies of the old building to pull out different pieces of history. I saw clearly that their relationship far surpassed a typical father/daughter bond.
Then, Tres’ ended his story, which included a hawk that gave him both inspiration and protection as he was away from his wife as well as inspired his most popular line of paintings “Amaze”, which involve a monk and a feather. Then, Lillis began her story, picking up exactly where he left off.

Lillis referenced a particular instance in which she and her dad were at their family summerhouse, “Sweet Apple” in Mentone, Alabama. She had graduated from college, completed an industrial design program in the University of Washington, gone to China, returned to the US and earned a masters degree in Chinese Studies, gone back to China, moved to Italy for a short stint, and had come back home.

Her dad asked her “If you could do anything in the world, what would you do?” Little did she know that her answer would change her life. She said, almost jokingly, “I would put your art on clothes.” 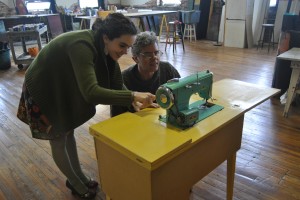 From a simple conversation in the country between father and daughter, stemmed a new line of clothing in which Lillis takes Tres’ artwork, manipulates it on a computer, makes fabric, and sews her own clothing out of the artwork-printed fabric. Just as Tres’ is a self-taught artist, Lillis is a self-taught seamstress, each discovering that their hobby provides a sense of joy, comfort, and calm that they had never known before. In the same way that Tres’ left his job as a biochemist, Lillis left her job in China, each to pursue a passion and a dream. Together with his art, and with her sewing skills, they formed “TreLilli”, Lillis’ clothing line.

“Just by following my heart and doing what I loved, I have been shown that I am on the right path, too, like my dad,” said Lillis, “And this year, 2012, really marks a movement forward for Tre’Lilli. Dad and I are going to three art festivals together including JazzFest in New Orleans and Cherry Creek in Colorado. We just keep doing this and keep having fun. The collaboration of his art and my clothing just makes sense to people.”

“I guess we’re just not inhibited by fear,” said Lillis. “We just kind of dream and make it happen. We’re not scared to learn and to change and grow. I think that is why we have been so “lucky”, because we’re not afraid of what will happen.”
For more information about Lillis’ clothing, visit www.trelilli.com. You can see more of Tres’ artwork at trestaylor.com.