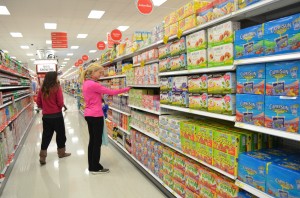 The excitement has only increased since the opening of the new PFresh Target in Colonial Brookwood Village. The store buzzes with customers coming to shop for their favorite products.

Among those customers are Samford students, who now have less than a two-mile drive to a Target from campus. Samford student, India Stallings thinks it’s easier to travel to this new Target because before it opened, the closest Target was located on Highway 280, which is notorious for bad traffic.

“It’s just a lot closer,” Stallings says. “It’s easier to get a bunch of things right across the street from Samford.” 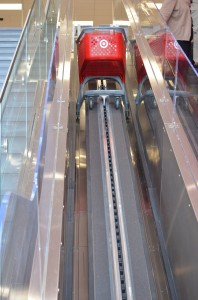 The new Target features a parking garage located on the lower level and a traditional Target store layout located on the upper level. Customers can walk up stairs or ride escalators and elevators to the upper level. Even the shopping carts have designated escalators, or cartveyors, to transport them between the two levels. The store carries fresh groceries and has a pharmacy and Starbucks.

“I love it. I’ve always been a big fan of Target and I’m still a big fan,” Stallings says. “The store was impeccable.”

At the ribbon-cutting ceremony March 5, Target store steam leader Erin Seago expressed the team’s excitement for opening the unique prototype, as she described it.

“It has been overwhelming and just amazing the support that we’ve seen, from months ago when we announced our max hire event to as soon as we let team members in the door; we’ve had guests trying to shop two months ago,” Seago says.

Homewood Mayor Scott McBrayer stated that Target made a wise decision by choosing Homewood, and that Target fits right in Homewood.

“We believe we have the greatest residents, the greatest businesses and Target, in my opinion, they really exemplify what Homewood is,” McBrayer says.