No Bigger Platform
Prev Next
Search

It all started with a trip to Disney World. According to Michael Catt, a 2001 Sherwood Baptist Church staff retreat to Orlando marked the genesis of Sherwood Pictures.

“We took a behind the scenes tour and learned about their Imagineers,” Catt, senior pastor of Sherwood, said. “As we walked around the park observing the attention to detail everywhere, we were challenged with this thought: If a secular company can be this committed to excellence, why can’t the church of Jesus Christ?”

Over a decade later, this church in Albany, Ga., has produced four major motion pictures that shamelessly profess the name of Christ. The Sherwood Pictures filmmakers have been sharpening their skills since “Flywheel” (2003), a story about a manipulative car dealer who changes his ways after encountering God.

“We just kept playing around with our home video camera and trying to learn everything we could,” said Alex Kendrick, one of Sherwood’s media ministers who directed all four films and played the male lead in three. “The more we practiced, the more we developed a knack for it.” 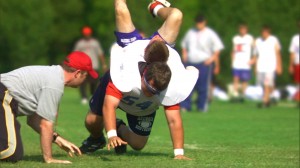 Their next film was 2006’s “Facing the Giants,” featuring the faith-driven turnaround of a high school football team’s six-season slump. This $10,000-budget film raked in a total gross of nearly $10 million in the US, according to the Internet Movie Database. The studio’s more recent releases, “Fireproof” (2008) and “Courageous” (2011) experienced similar success, each bringing in approximately $34 million.

“Most of the profits go right back into ministries,” Kendrick said. “So we’re thrilled that the movies are ministering to people, and the money they make is also used to minister to people!”

Kendrick and his brother, Stephen, have co-written all of the movies and the cast of each film has consisted predominantly of church members. Throughout the production process, Sherwood’s members serve in front of the camera and behind it, volunteering in everything from cooking for the cast members to being extras in the films.

Kelly McBride, a 2009 Samford graduate, grew up in Sherwood Baptist Church and helped behind the scenes. She played Bethany in “Fireproof,” a teenager who is rescued from almost certain death when her car gets stuck on the train tracks.

“Being involved in the movies was an exciting experience, and it was a really fun environment,” McBride said. “It’s also such an awesome ministry. A lot of people are critical and say they are just trying to get into Hollywood. But they’re creating an avenue to make people comfortable hearing the gospel.”

For “Fireproof,” the producers had a significantly larger budget of $500,000 to play with. This story of a firefighter who is forced to fight for his marriage when faced with the possibility of divorce has more intense action sequences and better cinematography than their previous films. Sherwood also filled the title role with a bigger name. Kirk Cameron, famous for embodying Mike Seaver on the late 80s, early 90s show “Growing Pains,” plays Caleb, around whom the plot pivots. But not a cent of Sherwood’s budget was funneled into Cameron’s paycheck. He volunteered to be in the movie without payment, accepting instead a donation to Camp Firefly, a charity for terminally ill children headed up by Cameron and his wife.

For “Courageous,” they continued the trend of casting some professional actors not affiliated with Sherwood. Ben Davies, a JMC major at Samford, plays David, a law enforcement rookie who is encouraged by his fellow officers to pursue Godly manhood. Davies said auditioning for the role involved more than just enacting a scene for the casting director. He was really auditioning himself. 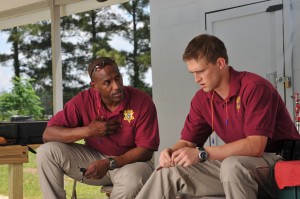 “I went through the scene with Alex and Steven, but there was also a panel in front of me with the pastor and his wife and daughter,” Davies said. “They asked me, ‘If you died today and were at the gates of Heaven, what would you say?’ I was so taken aback, and that’s kind of a hard thing to articulate on the spot. It was a really challenging moment and great to be in a working environment like that.”

This dedication to fill all the roles with actors earnestly seeking God has not been in vain. These four films have ministered to people in the U.S. and around the world.

“You’re called to make disciples of all nations, and there’s really not a bigger platform than entertainment,” Davies said. “Breaking out into the movie industry has allowed Sherwood Pictures to get a message to people who have never heard of it and are not used to it. For instance, the Kendrick brothers have gotten messages from people in rural China that saw bootlegged versions of ‘Fireproof’ and got saved.”

“Most movies just give you sugar in the form of mindless entertainment,” Kendrick said. “We hope to give you a well-rounded meal in the form of a movie and to increase your desire to know God.”

Kendrick says the Sherwood team is in “in the season of prayer that always leads to the next idea,” so Sherwood’s next movie could be coming soon.