Out of the dungeon
Prev Next
Search 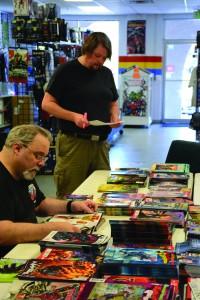 In a world where 2014’s two highest-grossing movies are based off comic book characters, the realm of comics and games can no longer be said to belong only to the “nerds.” Stan Daniels sees the effects of this widening appeal in his own store, Kingdom Comics, where the high school football players who would have teased him in his own childhood now come by after practice to buy the latest issues of their favorite series.

Across the country, comic book shops are seeing this popularity growth. According to comic book research site The Comic Chronicles, American and Canadian sales of comics and graphic novels reached $870 million in 2013, the highest figures seen since the industry’s boom and subsequent collapse in the 1990s.

Experts are pointing to multiple causes for this growth, including the rise of digital comics and superhero movies making comic book characters accessible to new demographics. In Kingdom Comics’ 11 years in business, Daniels has seen movies affect his sales, though not in the way people might expect. The success of movies based on little-known series, such as “Guardians of the Galaxy” and “The Wolverine,” creates a corresponding spike in sales as people try to learn more about the characters. Superman and Batman, however, are already instantly recognizable and their movies have no effect on book sales.

“They belong as much in that format [movies] as they do in comics to the general public,” Daniels said.

The rise in female readers is another oft-cited source of comic industry growth. While Daniels said he has seen some increase in the number of women in his store, they have always been a small core audience for Kingdom. The biggest difference in Daniels’ mind is that women are moving in larger numbers from independent comics to mainstream superhero stories.

“There’s not as much difference in the tastes of males and females. You’re seeing the females come more and more over to the male side of things,” Daniels said. “It’s more like a coming together than anything else.”

Just a few minutes down the road, Excelsior Comics, Games and Stuff has seen significant growth in interest from women. Owner Kenneth Oswald maintains that female customers are at “an all-time high” compared to any point in his memory.

Excelsior is distinct from Kingdom in that it focuses on tabletop and roleplaying games, such as “Dungeons and Dragons” and “Warhammer 40,000.” There are game nights nearly every day of the week, which Oswald said are popular because of their unique cooperative and social gameplay. He noted that much of the stigma against these games has also disappeared over time. However, comic books are still the mainstay of the three-year-old store.

Oswald acknowledged the influence of both superhero movies and the female demographic on his store’s sales, but he believes there’s another factor that has brought comic books into their new popularity.

“I would say that the independent comic book movement is the driving force in comics,” Oswald said. “They are really imaginative, really creative.”

Independent comic book publishers such as Image and Dark Horse Comics have made a name for themselves by publishing the stories that the giants – DC and Marvel – won’t touch. They enter new genres such as horror, science fiction and fantasy and are willing to make bold plot choices – even killing off main characters.

Many of these unique ideas, such as “Saga” and “The Walking Dead,” have become massively popular, drawing in new readers who were never interested in superhero tales. Oswald said this reinvigorated interest has been crucial to the industry’s success. 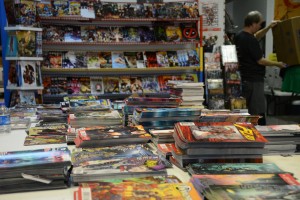 Despite seeing upward growth for several years, both Daniels and Oswald have a new challenge to face, one that could sink the standard comic book shop: digital comics. Partly responsible for the increase in nationwide sales, these digital comics have found a market among young readers who prefer to house their favorite series on a tablet rather than a bookshelf.

As digital media grows, Daniels said it could get to a point where customers no longer feel the need to ever enter a physical store. He admits he’s not sure how to respond to this possibility or prepare for it. Oswald, on the other hand, is attempting to bridge the gap by offering digital comic sales in the store. He hopes that by providing this service, customers will continue to frequent Excelsior for its customer service and socializing.

“There are people that collect that never buy an actual comic book or a collection, they buy just digital files,” Oswald said. “Venues like ours will ultimately move into that market. We’ve already started to do that, where we sell digital comic books right at the counter to the customer.”

All these external influences aside, the comic book industry has thrived because readers and shop owners like Daniels and Oswald see an intrinsic value to both the stories and the art form. Their illustrated style may be simplistic at times, but comics hold a unique place in popular culture.

“It’s all humanity trying to deal with itself,” Daniels said. “You can get a better read on the American psyche picking up that week’s comic books than you can in any other format or any other situation. Comic books are the true American art form.”

Banditos in search of BIG break

new hobbies you can take up while in isolation