From the Pulpit to the Picket Line
Prev Next
Search 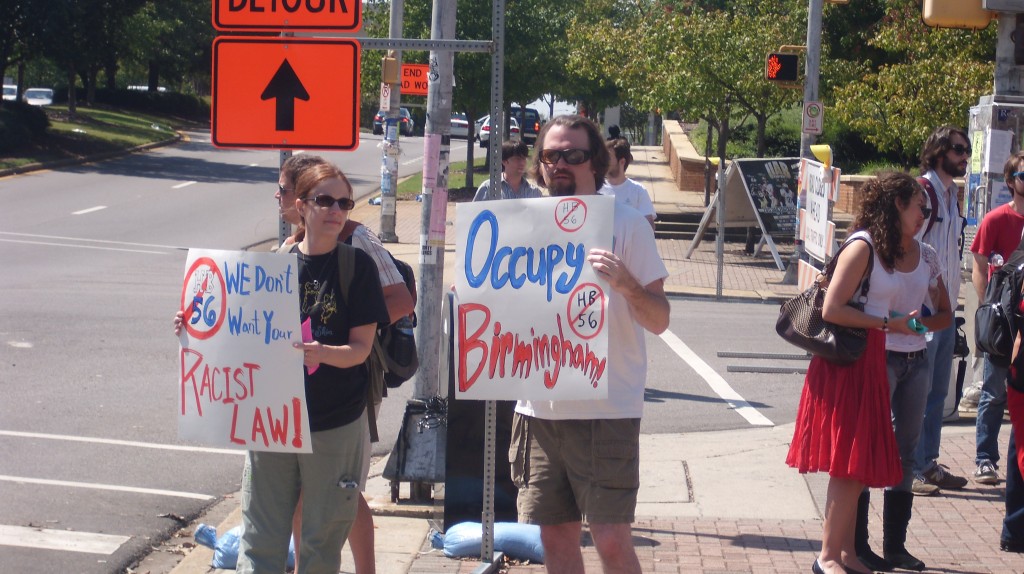 Reverend R.G. Lyons looks like a minister. Around five-foot-nine, he has a welcoming face that makes people want to open up. He works in an urban ministry out of his church, Community Church Without Walls, and spends most of his day handing out food and clothes. His office is a cluttered mess. Clothes, bins, papers and photos lie scattered everywhere. Two hand-drawn-signs are prominently displayed in his office. They read, “Best Pastor Award.” It’s obvious they were made by someone less than 6. Lyons speaks softly; one has to lean in at first to hear him, and his eyes are always looking to the distance, like his mind is somewhere else. He’s a quiet man. The kind of person one would find helping in a soup kitchen, not leading a crusade for civil rights. However, that’s where Lyons finds himself in what he calls his “journey.”

Reverend Lyons was not looking to lead a political movement and neither was his friend and co-leader, the Rev. Matt Lacey, but along with ministers, they find themselves in front of a battle against Alabama’s new immigration law. For these two ministers, they do not fight for political reasons but for their faith and the freedom to practice their faith as Jesus calls them to do.

Lyons said he first heard of the bill last spring when it passed in the Alabama legislature. “We should have been speaking out about it before it passed,” Lyons said, “But with the disaster relief we were involved in at the time, we just didn’t learn about it until after.”

Lyons said when he learned about the bill he was floored. “The law is so strict on illegal immigrants. It harkens back to the Jim Crow laws by discriminating on a certain group of people,” Lyons protested. “How can someone tell by looking at a person if they are illegal or not? What this leads to is racial profiling.” However, the biggest problem Lyons has with the bill is its clause that criminalizes anyone who helps illegal immigrants. “If the state makes it illegal to help illegals, it’s hindering the church’s ability to help those in need. Our pastor sends vans to pick up Hispanic immigrants. I’m sure some of them aren’t legal, and under this law, our church would be sentenced on criminal charges for spreading the gospel.” Lyons said.

Lyons is not alone in feeling this way. He has found a partner in Reverend Matt Lacey, a fellow Methodist minister. Unlike Lyons, Lacey never jokes. In a plain and direct manner, he explained how the inner-city work his church, Woodlawn Methodist, led him to partner with Lyons in protesting the bill. “Our church runs a food pantry on Mondays and Fridays,” Lacey explained as he sipped his afternoon cup of joe. “There are lots of Hispanics that come through those doors, and I’m certain some of them aren’t legal. However, we believe that we should give food to whoever walks in.”

Like Lyons, Lacey couldn’t believe that the law passed and felt called by his faith to fight against it. “This law demonizes our Hispanic population, and any law that demonizes a certain segment of the community is un-Christ-like.” Lyons and Lacey felt that as ministers they could not sit back and watch this injustice take place. They wanted to send a message to Montgomery, so they organized a petition that was signed by 150 Methodist ministers in Alabama and sent it to Gov. Robert Bentley. In the petition, they explain how they believe the law is an infringement on civil rights and goes against the basic principles of Christianity.

“Most of the people serving in the state government claim to be Christians,” Lacey said. “So I wonder if many of them have read the bill. If they had, then I would seriously question their claims to be a follower of Christ, because this bill goes against everything Christ taught.”

“We wanted to call them out,” Lyons said. “Most of them claim to be Christians, yet they pass this law that discriminates against a group of people. We wanted to show them that they weren’t living the life they said they were.” Since the letter, both ministers have been instrumental in organizing protest events and spreading knowledge of the bill throughout Alabama. Lyons helped organize five Methodist church gatherings where people could hear lawyers read what was in the bill and hear why other Methodist ministers were against it. Lacey has been working with other religious and student groups, most recently supporting a rally protesting the bill that was held on the University of Alabama at Birmingham’s campus. Neither one of them was looking to step into the political ring, but both feel that they are doing God’s work in defending Hispanics’ civil rights.

“In Romans 13, Paul tells us to respect authority, but that doesn’t mean submit to it,” Lyons said. “We should respect our country but our allegiance is to a higher calling. If there is a law or policy that goes against our faith, then we are called to fight it, not simply stand back and watch injustice happen.” Lacey agreed, stating, “When it comes right down to it, am I called to be an American first or a Christian first?” As this debate has heated up over the past couple of months, both men have brought these issues to the forefront of their congregation and have started a dialogue within their churches about what it truly means to be Christian and American. “For the first time, people are talking about what it means to live out their faith,” Lacey said. “We have people examining how they are living their lives and asking themselves, ‘Am a truly living as a follower of Christ?’ Our churches are being challenged to live Christ’s call, and I’m very excited to see people step up and take a stand for what is right.”

The bill was passed last week, but there is a silver lining. A federal judge has blocked certain aspects of the Alabama law from being enforced, including the part about punishing those who transport and harbor illegal immigrants. The case is still in the court systems; however, Lyons and Lacey will continue fighting it on the home front. They aren’t sure what the next step is, but as long as there is injustice to fight, they will follow God’s call to fight it.

“We aren’t community organizers, we’re not politicians,” Lacey said. “We’re just figuring it out as we go and walking wherever God takes us.”