Ruffner Mountain: a close escape for Birmingham
Prev Next
Search 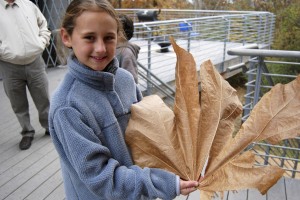 When the hustle and bustle of city life becomes too much, there’s always Ruffner Mountain Nature Preserve.

In addition to seclusion, the certified wildlife preserve also affords visitors 12 miles of hiking trails with varying levels of difficulty. The trails also give hikers a peek into Birmingham’s history, as they bypass the sites of the iron mines used to craft Sloss Furnaces.

Ken Sransky, a native of Trussville, Ala., first came to Ruffner Mountain with his son Jamie to birdwatch. Today, he’s visiting because the park is hosting a special event – a birthday party for his 10-year-old grandson Sam and his Boy Scout troop.

“My son Jamie is an artist and an architect,” Sransky says. “He likes to get the kids outside so they don’t watch television all the time.”

Sam, his troop and most of his classmates are unavailable for comment. They’re on a scavenger hunt with one of the park’s rangers – one of the many events Ruffner Mountain provides.

One of Sransky’s favorite aspects of Ruffner Mountain is its proximity to downtown.

“I’m from Trussville, so it’s really nice having something so close,” he says. “It’s very peaceful.”

His wife, Patty, seconds his opinion.

Welcome to The Local