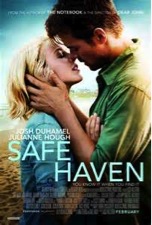 In the film adaptation of Nicholas Spark’s newest novel Safe Haven, a mysterious young woman named Katie, played by Julianne Hough, moves to a small town where everyone knows each other, except her.

As she tries to keep her distance and privacy, she gains the attention of a handsome young widower, Alex, played by Josh Duhamel. Katie reluctantly falls for Alex and starts putting down roots; but conflicts arise as her dark past comes back to haunt her. The question looms, will she be able to escape her past and find true safety in the arms of Alex?

Prior to viewing Safe Haven, I heard rumors that it is “as good as The Notebook.” Despite my high expectations, Safe Haven didn’t live up to the hype. The substance of the storyline was touching, but the film proved to be fairly predictable.

“I figured out the ending twist before it even happened,” says Jaime Richter, a college student at Samford University. Despite the predictability, Richter says she still enjoyed the story and plans to read the book.

In terms of acting, Josh Duhamel shines in his role as a quirky young storeowner, playing both mom and dad to his two young children, while trying to move on after tragically losing his wife. Julianne Hough is less impressive. Her attempts to evoke the mystery of her character fall flat and it seems as though she simply lacks charisma.

While Safe Haven fulfilled the purpose of a gushy love story just in time for Valentine’s Day, the overall quality of this production is mediocre at best. Aside from that, most viewers still manage to leave the theater moved by the story and wiping away tears.

View the trailer for this film.

Blooming Fields to Fill Your Weekend