Trading Places: From Hong Kong to Samford
Prev Next
Search

Hong Kong Baptist University (HKBU) student Yip Ting Yan “Lancy” and Samford student Whitney Anderson traded places: Lancy went to study at Samford for the year, and Whitney spent the spring semester at HKBU. Both students quickly found new meaning to their “college experience,” realizing that it is most enhanced by studying abroad and experiencing new cultures. Lancy decided to study at Samford after hearing that it was a good Christian school with an exchange program.

“I prayed about schools on a list that I made, and I ended up choosing Samford,” Lancy said. 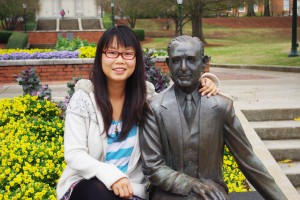 “I wanted to so something outside of Samford, and my friends Kley Sippel and Craig Thiessen had studied in Hong Kong before,” Whitney said.

Lancy loved studying at Samford because of the community and the people. However, she experienced a lot of culture shock. She said Americans and people from Hong Kong are different in lifestyle, mindset and habits.

“It’s easy to make friends, and people teach me the culture, local slang and English,” she said. “American culture is welcoming and friendly. People always ask how you are, and they are laid back. And, I got to know the culture from the other exchange students. It is really interesting to see the similarities and differences among different cultures. On top of it, all of us like traveling.”

Whitney said she wanted to study abroad and get out of her comfort zone. She was the only Samford student in Hong Kong in the spring, but she saw the program as a good opportunity for her to meet new people from all over the world.

“I have met people from all over the U.S., Europe, Asia and Australia,” she said. “All the different cultures come together even though we’re all from different places. We all came here with the same mindset.”

Lancy said she missed her friends and classmates from Hong Kong but that people at Samford were very nice and welcoming.  Another big change for her was with the work environment at Samford, which was a lot different than at HKBU.

“In Hong Kong, the employers can be very hard on you when you work,” she said. “I worried about doing things wrong and wanted to do a good job.”

At HKBU, Lancy did random work as a private tutor for secondary school students and as a tour guide for students travelling overseas. She also worked in the Food Court at Samford, and she said it was difficult in the beginning, but it got easier and was helpful to her.

“My job in the Food Court helps me with nutrition and with improving English,” she said. “I also meet a lot of people when I work.”

Lancy was not a big fan of the food at Samford, especially since she was not used to having a meal plan and eating in the cafeteria.

“I like to eat out a lot more,” she said. “We don’t have a meal plan at Hong Kong Baptist. And, there are three canteens, a Chinese restaurant and two convenience stores.”

Whitney said that the food was cheaper in Hong Kong. Since HKBU did not have meal plans, she sometimes ate in the dining hall, but she said it was hard to find foods that she liked.

Lancy is double majoring in Chinese medicine and biomedical science, which is a five-year program. She will go back to HKBU for the fall semester to finish her final year. She dreams of starting a clinic in Kenya one day.

The United States was not the first of Lancy’s travels. She has been to Kenya, Indonesia, Cambodia, Malaysia, Australia, Taiwan and China. Additionally, she traveled around the United States, Canada and Costa Rica just this year. Whitney traveled to the Philippines, Thailand, Bali, Malaysia, Vietnam, Cambodia and mainland China over the course of the semester.
The language barrier made it a little difficult to talk to students and hangout with them, and said she missed the familiarity of Samford.

“Doing simple things like ordering food and asking for directions has been difficult,” she said. “Even though they speak English, you still have to listen to their accents.” But she really enjoyed hanging out with the other international exchange students.

If someone from HKBU were to ask her about Samford, Lancy would tell them that her experience at Samford was good and she learned a lot being in the United States.

“They are not crazy Americans,” she said. “But don’t be late for class.” Apparently, in Hong Kong, it is alright to be a little late for class because traveling is more difficult, as they rely much more on public transportation.

People talk more about Jesus at Samford than at HKBU, Lancy said. “It’s not as common in Hong Kong to talk about it as much. But still, we do have Christian choirs, Christian student unions and Christian bands.”

Whitney also said that Christianity is a lot more obvious at Samford. “It was not a big culture shock coming to Hong Kong,” Whitney said, “but I really do use chopsticks at every meal.”

Lancy also mentioned that in Hong Kong, people did not speak up in class as much, and there are more lectures.

“Here, students speak in class more, and there are more discussions and group projects,” she said.

Hong Kong used to be British-owned, so everyone knows English, but they still speak Cantonese, though the classes are taught in English. Classes in Hong Kong include more lectures and then smaller sessions later in the week called tutorials.

“Classes are a lot bigger and therefore not as personal,” Whitney said. “But the classwork is about the same.”

Lancy said that even though they take classes in English in Hong Kong, the English spoken in Hong Kong is a lot simpler, so there was a lot to learn by being in classes at Samford and speaking English with Americans. 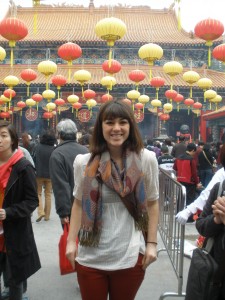 The community at HKBU was similar to at Samford, Whitney said.

Whitney loved going out and exploring and seeing different parts of Hong Kong, as well as hiking up Lion’s Head Rock, a mountain right behind the city.

“It’s a different setting than Samford,”she said. You have this huge massive city, but then right outside of it, it suddenly turns into nature, just about 15 minutes from campus.”

Lancy said going back to Hong Kong will be bittersweet. “I feel so strange because it feels like I just adapted to it here, and I have some really good friends here that I can share the life with,” she said.

Like Lancy’s experience at Samford, for Whitney, studying in Hong Kong has been Whitney’s favorite college experience.

“Everyone should go out of their comfort zone, go somewhere really different, study abroad, and meet different kinds of people,” she said. “It’s a really cool experience. I wouldn’t trade it for anything.”