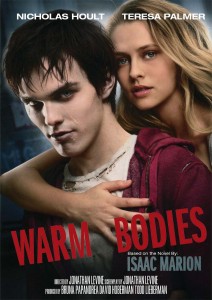 Based on the novel by Isaac Marion, Warm Bodies is the classic love story with a bit of a twist: the hero is a zombie.

Nicholas Hoult (X-Men: First Class) stars as a young zombie, who narrates the movie as he trudges along the apocalyptic city. While out looking for food, otherwise known as anything with flesh and a brain, he and his herd stumble across Julie (Teresa Palmer), and he decides to save her rather than eat her. As he spends time with her, the human connection he feels for her changes him, and it begins to cure him of his disease.

Now, I know what you’re thinking. This movie sounds incredibly cheesy and stupid; why on earth would I want to waste my time? Before you write this movie off as terrible, hear me out.

I went in with the expectation of Warm Bodies being the next “Twilight”; meaning I expected a ridiculously bad attempt at a zombie comedy (if such a thing existed). It completely blew my expectations out of the water. Yes, it is cheesy and could be considered the equivalent of Twilight to some, but I would beg to differ that it is quality entertainment. My best friend went with me and was very skeptical before the movie began. By the time we left the theater, all we could do was quote the hysterical one-liners.

Filled with quirky romantic moments, witty lines and blood-and-guts action, “Warm Bodies” is perfect for the night when you can’t decide on which type of film you want to watch because it has a bit of everything.